The Bricken building has served as a landmark in the field of law in Crenshaw County since it was constructed. It was originally built by Benjamin R. Bricken who was the first Attorney at Law in Crenshaw County, in 1893, the same year the first Courthouse was built in Luverne, the county seat. From 1893 the building was occupied by the law firm of Bricken, Bricken and Bricken, composed of Benjamin R. Bricken, Judge Charles R. Bricken and Frank B. Bricken. This firm practiced in the office until the death of Benjamin R. Bricken in 1909, and until the election of Judge Charles R. Bricken to the Alabama Court of Criminal Appeals. Frank B. Bricken continued to practice law in the building until his death in 1933. In 1933, Ben H. Lightfoot and Horton H. Little practiced law in the building under the name of Little and Lightfoot until 1936 when Ben H. Lightfoot was elected as the prosecuting attorney for Crenshaw County, at which time he moved his office into the Courthouse. 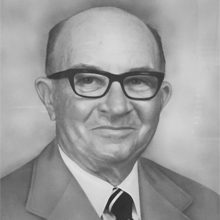